Native Plant of the Month – August 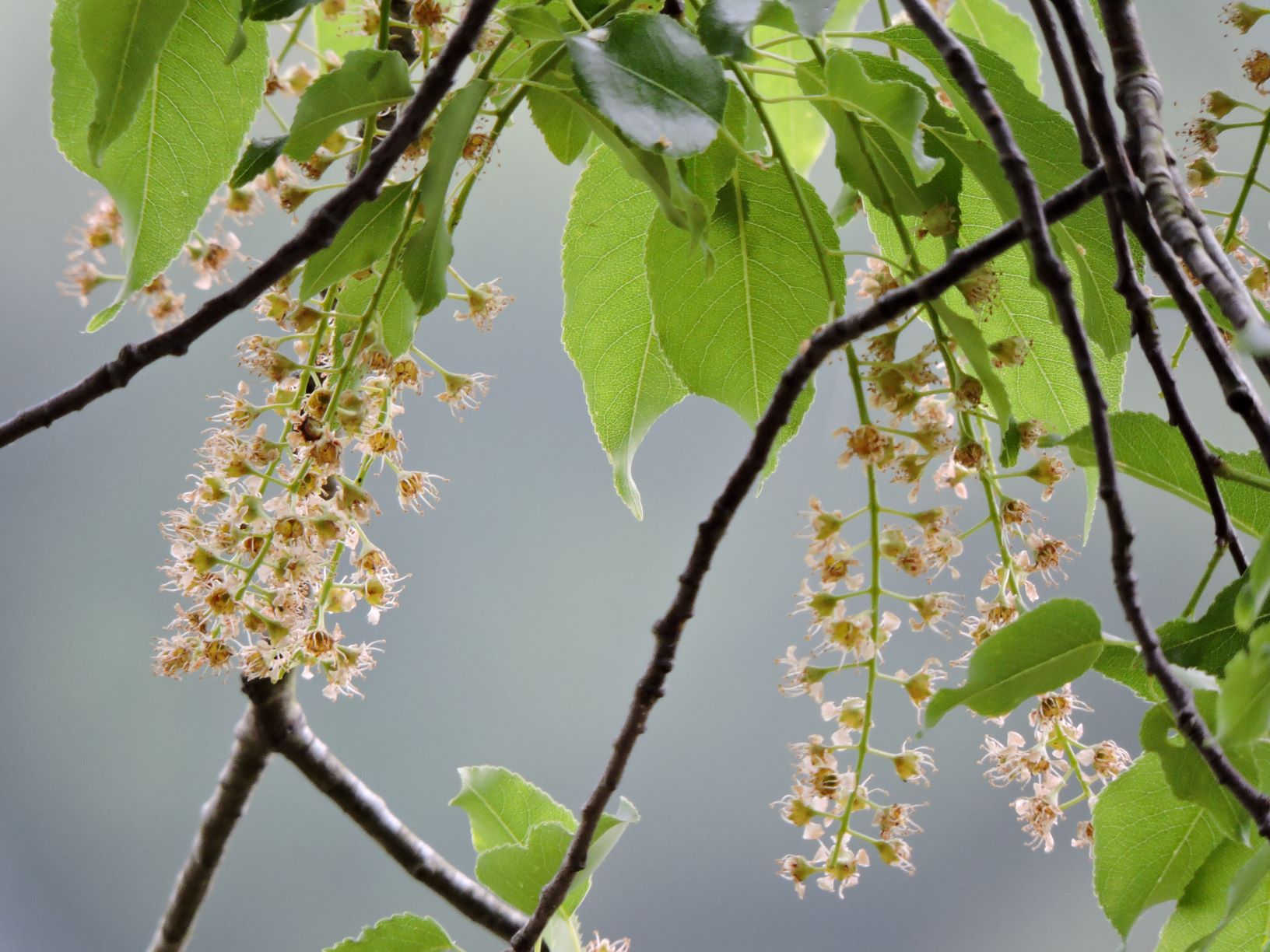 Escarpment Black Cherry is a beautiful and unique regional variety of Prunus serotina that is endemic to the Hill Country and south central Texas. Prunus serotina var. eximia is a great tree for wildlife, and is delightful-looking year round and as it changes through maturity –  from its narrow, tall form as a young tree, to its fragrant early spring blooms that are beloved by bees, the refreshingly lush green foliage, the small and edible cherries (black when ripe, but the pit and wilted leaves are toxic), the crisp yellow fall colors, and the intricate and changing patterns of the bark, which is also traditionally used to make medicine.

While mostly smaller specimens are left after centuries of deforestation combined with over-browsing of saplings, there are still great 40-50+ foot Escarpment Black Cherry trees here and there. These are remarkably hardy trees that will survive severe drought through dying back to their roots and going dormant. Though very hardy, in order to truly thrive to their potential they need slightly more moisture than the average hill country tree, and can grow into beautiful large trees that make dense shade when they have good soil, ample water, and close to full sun, but with the shade of other trees or a hill.

Almost all large remaining cherries are in a moist canyon or on a north-facing slope with good forest cover around them, creating deep shade, which helps to conserve moisture in the soil when it is most needed!

Once we’re in the midst of summer, we can fully appreciate the cooling value of the native forests of Texas, and so do all the plants and animals! Creek and rivers here greatly benefit from tall tree shade as well, since it reduces evaporation and keeps water temperatures at livable levels for aquatic wildlife. Historically, most of the Hill Country’s steep slopes and hills were forested in old growth woodland, and the individuals trees were much larger, with a tall expansive canopy that shielded many more sensitive understory plants and the soil from the intense heat. Due to the loss of soil health, depth, and its microorganism connectivity, it is much harder for slightly needier native trees like these to survive across much their historic range, so these cherries are often found as a small understory tree growing in the shade and nicer soils produced by oak trees, due to the lack of remaining suitable habitat. Tiers of canopy shade are a necessary part of the native ecology of the Hill Country, and are how most woody species here grew together, as described by those who saw this region before it was largely deforested by 1860.  Many native trees do not like to spend their youth in the full sun, where the harsh sun rays cause them to spend most of their energy respirating, rather than use the energy to grow. They also do not like their soil and root area exposed to bake in the sun instead of growing in the deep, spongy, humus and moisture-rich forest leaf mulch they should have.

A common and unfortunate myth in Texas is that native grasses do not grow under trees – which has really only come about from the short-sighted observation that in overgrazed pastures where all the grass was killed and thus woody vegetation begins to fill the created void of life, there often will still be little grass once trees re-vegetate the area – because there wasn’t really much left before… Yet we can’t make such claims and scapegoat trees for centuries of poor land management if we spend enough time with the native grasses in their less-disturbed habitats.

Many great native grasses love to grow in at least partial shade, including eastern gama, bristlegrasses, indiangrass, setaria, inland seaoats, wildryes, etc. It would be beneficial for more ranchers to encourage and utilize shade pastures for summer forage, since the same grass in shade vs sun might still be green and growing vs dry and shriveling in the dryness of late summer. In many upland areas, the remnants of the big native bunch grasses (that are now mostly restricted to riparian areas and lowlands) cling on to life often only by the protection and partial shade of trees – just shielding plants from the later afternoon sun goes a long way in making it possible for them to survive tougher soil and moisture conditions.

Full sun is more bearable to plants in Texas when they have deep soils and good moisture – and the loss of these things from the erosion and dehydration of this region means that shade and trees, and the positive feedback loops they create towards a more moist environment, are more important than ever!